This Schuler Scholar, Lindblom Sophomore Kennedy Shanks, Has a Mission to Change Chicago’s South Side

Kennedy Shanks is ready to change the narrative of Chicago’s South Side.

The 16-year-old sophomore at Lindblom Math and Science Academy recently celebrated the one-year anniversary of the justice organization she founded, “Minorities, Speak Up!” Shanks, a resident of Chicago’s Washington Heights neighborhood on the South Side, said she wants her organization to have “chapters around the country and eventually the world to change narratives.”

Shanks is also a Scholar within the Schuler Scholar Program, which provides students and their families with a dedicated support team and resources – free of charge – throughout all four years of high school and beyond.

“The Schuler Scholar Program has really supported me with my education and with so many other things, including my mental health,” Shanks said.

Shanks said this past April, she had a mental health experience that led her to missing 45 days of school. She said the Schuler Scholar Program personnel kept her on her toes and made her feel extremely appreciated.

“I felt down and they provided me with the resources to help me come back,” Shanks said. “They assured me that I would bounce back.”

Since its first partnership with Waukegan High School nearly two decades ago, the Schuler Scholar Program has teamed with more than a dozen Chicago and Chicago-area high schools since its founding, and expanded to Milwaukee this year.

Since 2001, the Lake Forest-based Schuler Scholar Program invested nearly $100 million in the more than 1,400 scholars – including mostly first-generation students, students of color and low-income students – and sent them to highly selective colleges and universities. Of the 1,400-plus scholars, 94 percent complete an undergraduate degree at the country’s top liberal arts colleges and universities.

Kari Mueller, the Schuler Scholar School Director at Lindblom, said she has been impressed with Shanks’ “ability to see the world not only through her eyes, but through those around her.”

“She already sees, understands and wants to understand more about the ways communities are connected,” Mueller said. “Kennedy simply brings out the best in those around her. With leadership skills like this already at her young age, I can't wait to see what she does in the future.”

Shanks founded Minorities, Speak Up! on Oct. 18, 2018 and said the organization’s goal is to “provide a platform for youth to be able to talk about situations that happen in real life and showcase those conversations in visual ways, like music, dance, poetry and videography.”

“Minorities, Speak Up! is in the current stage of recruiting minority youth individuals to be representatives of their cultures and backgrounds and being able to showcase that to the world through my organization,” said Shanks, who noted she is in the process of making Minorities, Speak Up! an official 501©3 nonprofit. “Our leaders go to many events around the Chicago area, our hearth, … and we attend church functions and events to expose the organization and help in the community.”

Shanks said her top college choices include Howard and Hampton – both part of the Schuler Scholar Program network. She noted she wants to be a positive representation of Chicago, especially her South Side neighborhood. 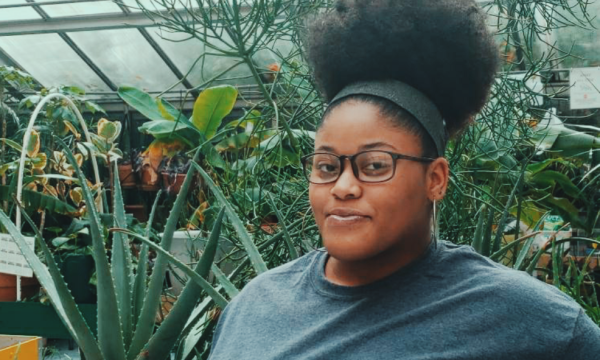